About the Blog’s Dogs

Some people have doggie entourages. Based on a small sample of two — I started sharing my life with dogs later than most — I’m a one-pup-at-a-time person. Given that the pups I’ve picked seem uninterested in socializing with their own species, it’s worked out well. In the beginning, there was Frankie.

He was the inspiration for this blog, and he lives on through its many posts — as well as through a greeting card, cocktail napkins, refrigerator magnet, and the promo trailer for my book.

Frankie’s life, including his struggle with diabetes — well, really mine — is detailed here. So is his death, and the fund I created to commemorate him. I’m not going to lie. A lot of those posts are painful to read. But pain is part of loving a creature whose lives are shorter than ours.

Now there is Madeleine. She is a totally different creature, bold where Frankie was timid, independent. Food driven. Whereas nervousness prevented Frankie from eating outside the house, Madeleine is never too stressed to miss a meal. 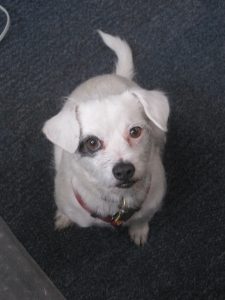 There are some commonalities, including cuteness, smallness, whiteness, and the aforementioned lack of interest in socializing with other dogs.

Also sweetness. And stubbornness (they are, after all, terrier mixes). And the ability to make me laugh.

I have managed to adopt two very dissimilar creatures who have brought me great joy.

One other commonality: Both dogs are gender stereotype benders. Madeleine pees like a boy, lifting her leg to make her mark in the world throughout the course of a walk when there must be nary a droplet left. Frankie squatted like a girl, getting his business done once, efficiently.

And whereas I dressed Frankie fairly often because it seemed to suit him, I never get the urge to gussy up Madeleine. She wouldn’t hate me if I dressed her but it just wouldn’t feel right to me.

Adopted on July 24, 2014, age 4ish. No designated birthday; I never did start calling her Maddie. The name she came with, Madeleine, suits her just fine.