Forgive me for this post’s title. It’s an in joke, a spin on the perhaps apocryphal story told to me by Arizona historian Jim Turner, who wrote yesterday’s post about Wyatt Earp’s dog. According to Turner, an editor once observed that the most popular topics for readers are the civil war, pets, and medicine, so the perfect — as in most marketable — story would be about President Lincoln’s doctor’s dog.

If the title is dubious, the comparison between historic and modern dog is legitimate. When I asked on my favorite message board, Twitter, if anyone could identify the breed of Wyatt Earp’s dog, I got an answer from Jen Kirby, a long distance pal — and talented artist — who lives in the UK. Jen knew that Earpie was a border collie mix, she wrote, because she used to have a dog that looked exactly like him: Trixie. 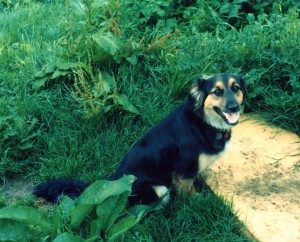 Trixie, who never heard of Wyatt Earp or his dog

Trixie was quite a character — and not in a good way, for the most part. The wily and combative canine might have been perfect for Wyatt Earp in his rowdier days.

By the time she was four months old, Trixie had grown larger than her own mother, Molly, whom she began bullying — which is how Jen came to acquire her.  Trixie’s original owner was Sally Miles, an actress who suffered from motor neuron disease and used a wheelchair. It soon became clear that Sally couldn’t handle the obstreperous pup. Sally knew that her neighbor, Jen, would be kind to Trixie, no matter how badly she behaved.

In public, Trixie was a dream. “She was wonderful with dogs we met on walks and never got into fights with them,” Jen says. At home, it was another story:  “She attacked any dog who came to our house more than twice.” Trixie even attacked Tiggy, the male Border Collie already resident at Jen’s house. “She attacked him while I was out,” Jen reports. “I found out from the big bite holes behind Tiggy’s shoulder blades.”

Jen had also observed Trixie’s stealth methods with other friends’ dogs. Trixie, she says, “had a way of coming up from behind, rubbing herself ‘affectionately’ alongside the other dog until she was in position to sink her teeth into their backs.”

Almost no dog, no matter how mild-mannered and unthreatening, was spared Trixie’s predations. “My parents got a border collie called Sonsie, from the Robert Burns poem with the dog with the sonsie face [The Twa Dogs],” Jen says. “She was a rescue dog and an absolute angel. My mother brought Sonsie to visit for a few days once and it was OK. Next time Mum visited with Sonsie, Trixie attacked. Her ambition seemed to be ‘Kill Sonsie.’”

But Trixie finally met her match with Bran, a German Shepherd dog that Jen rescued. Bran “took one look at her, weighed her character up, and took her head quite gently in his jaws.” Trixie whimpered and after that always behaved with Bran. At least when Bran was present. Trixie “didn’t dare eat Bran’s dinner while he was in the house, but she used to pretend to wee in the garden and eat his dinner while he was looking for the wee to ‘cover.’”

Speaking of bathroom habits, Trixie never was really housetrained. Because her original owner, Sally, was in a wheelchair, Trixie  stayed in the kitchen, with access to the outside via a dog door, during the day. As a result, she primarily knew a hard floor inside, grass outside. “Once I got her home,” Jen says, “I realised she thought that carpet and fabric were the same as grass.” The dog did have a urinary revelation, however. “One day Trixie followed me up to the bathroom and saw me using the WC. Her little eyes lit up, as though to say, ‘so this is where you do it.’ And she squatted in front of me. You could practically see the cartoon light bulb over her head!”

As the mean often do through sheer orneriness, Trixie lived to a great age. Despite everything, Jen says, “I was grateful to her for helping Bran as he had dreadful separation anxiety and hated to let me out of his sight.”