Aaah, Austin, that laid-back city in the lake-laced hills, home to cyberpunks and environmentalists, high culture and haute cuisine. A leafy intellectual enclave lying well outside the realm of Lone Star stereotypes, Austin has been compared to Berkeley and Seattle, but it is at once its own place and entirely of Texas.

I wrote those words in 1994 as the introduction to the Austin section of Frommer’s San Antonio & Austin. I had updated many guidebooks before, but this was the first time I wrote one from scratch — and, as is my wont, I worried whether I was up to the task. I hadn’t been to either city before and my driving skills were still being honed.

My disastrous introduction to Austin is one of the stories from GETTING NAKED FOR MONEY: An Accidental Travel Writer Reveals All  that I plan to tell when I read in that city on June 20th.

Also in that first edition of the Frommer’s guide was this listing for Book Woman:

Offering the largest selection of books by and about women in Austin, this store is also one of Texas’s best feminist resource centers, the place to find out about women’s organizations and events state wide.

Book Woman also carries a great selection of T-shirts, cards, and posters, including a blowup of the Texas Monthly magazine cover of a white-leather-clad Governor Ann Richards straddling a B-I-G motorcycle.

BookWoman’s address has changed — I visited when it was on 6th Street; it’s now on 5501 N. Lamar — and Ann Richards is no longer with us (damn, I wish I’d bought that poster); neither is Molly Ivins, my other Austin feminist hero.

But all the rest of what I wrote about BookWoman is true and I’m thrilled to be reading there. 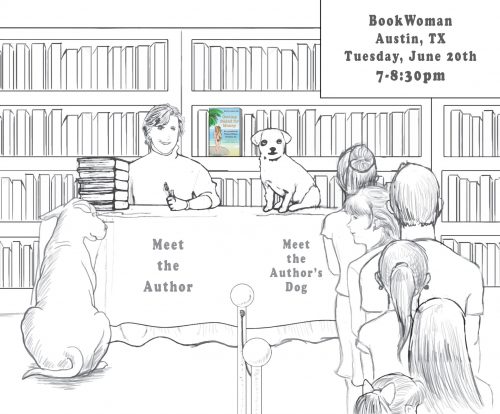 I may not be doing guidebook research any more but I’m always on the lookout for great accommodations — and now they need to be pet-friendly. Voila — the Highlander Hotel Austin. The price was right, the amenities — including guest laundry — were great, and the location was ideal: in the up-and-coming Highland neighborhood, about eight minutes from BookWoman. The pictures of the cute pink sheep drew my interest, and this description was coup de gras (or is that coup de baaah?).

Legend has it there was a farmer in the Highlands of Scotland who bred an exotic strain of pink sheep. Thinking this would be a unique marketing tie-in for our hotel here in the Highland section of Austin, we imported several of them to deploy in our common areas. Though they were a source of great delight for our guests, sheep—especially kept indoors—are unruly. Pink ones especially. So we returned the sheep and replaced them with the highly authentic-looking replicas that you’ll see in and around the hotel. We encourage our guests to take pictures with the sheep and post them. #cheapmarketingploy #whattheflock #thehighlanderaustin

Kudos from one shameless marketer — and punner! —  to another. We are in the same flock, for sure.

One thought on “Author & Her Dog Book Tour, Austin, June 20”