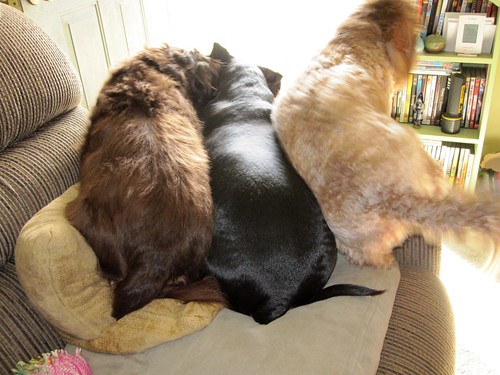 Let’s face it: Dog owners spend a lot of time discussing dog butts and what emerges from them. Puppy bums lend themselves to lots of joking. But this article, adapted from one I wrote for Your Dog, the Tufts University veterinary school newsletter, deals with some medical problems that are no laughing matter.

That doesn’t mean I was going to put in graphic disease photos. Dog butts are cute and funny.

“We don’t know for certain why the sacs are there or why the fluid is produced,” Dr. Berg says. “It’s theorized that the fluid may lubricate the stool and make it easier for the dog to defecate.”

Unquestionably, the fluid has a marking function, creating a signature odor that other dogs can identify — which explains why dogs sniff each other’s rears. Dogs, and especially puppies, may also expel the fluid out of fear. The effect is skunk-like, as some owners can attest.

Note: Normal secretions are brownish and either liquid or, if the sacs are blocked, the consistency of peanut butter. If discharge looks pus-like or bloody, an infection may be present and you need to consult your veterinarian.

Although perianal fistulas are sometimes diagnosed in other breeds, including Irish setters, Labrador retrievers and some Arctic breeds, the great majority of them occur in German shepherds. The condition usually develops when the dog is 5 to 8 years old, occurring more frequently in males than females. The diagnosis is visual. The disease doesn’t show up in blood tests, and no special imaging techniques are required to see the lesions. Owners must simply remember to check under their dog’s tail.

The cause of perianal fistulas remains unknown and, for many years, antibiotics were the standard treatment. When the drugs didn’t provide more than temporary relief, as frequently occurred, veterinarians often recommend surgical removal of the infected tissue. This was expensive and often ineffective in preventing the fistulas from returning.

In recent years, oral doses of the immunosuppressant drug cyclosporine have had a far higher success rate in treating the disease. This success may also shed light on why German shepherds are prone to developing perianal fistulas. The breed is hereditarily predisposed to disorders of the immune system, and the dogs’ responsiveness to an immunosuppressant suggests the disease falls into this category.

Although a course of cyclosporine is expensive — $1,000 to treat a typical GSD — Dr. Berg estimates that approximately 80 percent of dogs who take the drug experience a complete resolution of their fistulas. “Generally, they will have a very dramatic improvement within a couple of weeks,” he says. Some dogs who don’t have a good response initially may improve with a higher dose. “Some vets measure the dose by monitoring the blood levels of the drug. Other vets gauge the dose by the response to treatment,” he says.

Generally, dogs stay on the drug for six to eight weeks. In the majority of cases, the fistulas disappear by this time and tend not to recur. “There are dogs who do relapse and some whose fistulas don’t totally dry up,” Dr. Berg says, “But with this disease, if you can make it much, much better that’s often enough to produce a significant improvement in quality of life.”

A small percentage of perianal fistulas is resistant even to cyclosporine. They recur even when the infected tissue is surgically removed. In those cases, a veterinarian may recommend amputation of the tail. This may seem like a drastic measure, but because it prevents the area from becoming reinfected by exposing it to the air, it is an effective one.

Brenda Griffin of Tucson [Ed. note: yes, she’s a friend, though I never met Bean] was shocked when her veterinarian suggested tail amputation for her 3-year-old German shepherd, Bean, a decade ago, before cyclosporine was widely prescribed. But when Bean continued to develop fistulas after several rounds of antibiotics and three surgeries, she was desperate enough to try it — and surprised at the results.

“I thought not having a tail would throw off his balance and make him look odd,” Griffin says, but neither of those things happened. Bean resumed his athletic activities with his previous grace, and no one who wasn’t acquainted with him pre-surgery noticed anything amiss. “People would ask, ‘What kind of dog is that?’ because they’d never seen a German shepherd without a tail,” she laughs. “But the surgeon was so neat you never would have guessed a tail was ever there.”

Like perianal fistulas, perineal hernias are often easy for owners to diagnose by sight. When the muscles of a dog’s pelvic diaphragm weaken, the pelvic and/or abdominal organs may intrude through the pelvic canal into the region around the anus called the perineum. When this intrusion, or herniation, occurs, owners can observe an abnormal soft mass on one or both sides of the anus. They’re also likely to notice that the dog strains to defecate.

“Because the rectal wall has lost support, it deviates to one side,” Dr. Berg says. “And if the dog’s stools may not easily pass through the deviated area, having to go around a U-shaped bend, defecation is more difficult.” A veterinary visit for a rectal exam will almost always confirm a perineal hernia.

The reasons for the development of perineal hernias aren’t completely understood, but most cases occur in middle-aged or geriatric male dogs who are intact. This points to prostate enlargement and the concomitant straining to defecate as a source of the problem. Testosterone may also directly weaken the pelvic diaphragm. Other theorized causes of perineal hernias include hormonal imbalances, damage to the nerves of the pelvic diaphragm and straining due to other rectal diseases. “Also, females may have a stronger pelvic diaphragm because they need it to be stronger during child birth,” Dr. Berg says.

Although the distended area may look frightening to an owner, perineal hernias shouldn’t be considered a cause for immediate alarm unless the bladder is involved and the dog can’t urinate. The condition isn’t particularly painful and some dogs display no symptoms at all. Nevertheless, surgery to repair the hernia is recommended. “Most dogs are straining to defecate or they’re constipated, and only surgery can take care of the problem,” Dr. Berg says.

The standard surgery to resolve perineal hernias is fairly simple. “The surgeon makes an incision over the swelling next to the anus, pushes the organs back into place and then uses a flap of a muscle in the area to coverlose the defect, creating a new diaphragm,” Dr. Berg explains.

While the dog is under anesthesia, another simple surgery is indicated: neutering. If the prostatedog is left intact, the problem is likely to recur, Dr. Berg says. “One reason, among many, to get your dog castrated early in life is to prevent perineal hernias.”