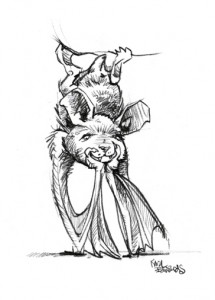 This is the conclusion of the formal interview that I’ve been conducting with trainer Irith Bloom about Behavior Adjustment Training (BAT), which was created by Grisha Stewart. The first week we covered the basic theory and techniques. In the second, we got into some more esoteric issues like “negative punishment,” which turns out not to be a bad thing. Opinion was divided about the accompanying video, the pug screaming “Batman.” As a result, I promised no more bat illustrations.

What can I say? I couldn’t resist these amusing — and far more tasteful — images, brought to you by Karl Edwards who, as it happens, also does custom dog portraits. Check out the wide range of work of this talented, award-winning illustrator at his website.

There will be videos and more about BAT in the future as my training with Frankie and Crystal progresses. This is just the end of the Q & A. Thank you, Irith, for your help in explaining this program — and your patience with my endless questions.

You’ve been talking about the different signals to look for in your dog during BAT setups. Could you please detail them?

One of the side-benefits of doing BAT is that you tend to become more attuned to what your pet is “saying” because the method requires very close attention to the animal. That said, even the most astute trainers can’t enter the mind of the dog. Sometimes a dog’s intentions are surprisingly obvious, but often it can be hard to say if the dog is (a) calming himself/herself down, (b) trying to calm the other dog down by signaling that no threat is intended, or (c) saying “back off” or “I’d like to end our play now.”

In a BAT training context, my primary concern is to see appropriate behavior from any of these categories so that the dog doesn’t reach a stress threshold, though in the latter stages, I may make judgment calls about whether to allow greetings, etc., based on my perception of the intention.

Here are some calming signals one tends to see when doing BAT, in alphabetical order:

Here are some relaxed and friendly behaviors one might see while doing BAT, again in alphabetical order: Note that friendly and relaxed behaviors don’t necessarily mean the animal is ready to interact with the stress-inducing thing. Closing those last few inches (so to speak) can increase the intensity for the animal suddenly, so that you get an explosion even though things were going perfectly just seconds earlier. It’s best to spend much more time than you think you need working on near approaches before allowing actual greetings.

Can you give me an example of how BAT has worked with a client of yours?
I have a client who first contacted me after she had already been doing CC&D with her dog for quite a while without really getting anywhere. The dog was highly agitated by people ringing the doorbell and then walking in the front door. No matter how far he was kept from the door, how many treats he was tossed by visitors and by his owner, and how many toys he was distracted with, he continued to behave aggressively. Given this history, I suggested we try using BAT.

At our first BAT session, I had my client keep the dog about 15 feet away from the door to begin with, and I started out at the end of the path through their yard, by the driveway. I walked up the path, watching the dog through the front window, and as soon as I saw the dog notice me, I stopped. I stood in the same spot until the dog offered an acceptable behavior (a look away, as I recall), and as soon as I saw that behavior, I quickly said “Yes!” and walked away.

We alternated having me walk away and having the dog walk away for a while, with me approaching to the same spot, until we got a range of acceptable behaviors from the dog. Then I began coming farther down the path in stages, waiting for a range of acceptable behaviors at each new spot, until the dog offered acceptable behaviors even when I got right up to the door. Next, I started to knock on the door, first very softly, and then louder and louder, and finally I rang the doorbell. Thanks to all the preparation we’d done, the dog, who had been unable to tolerate people even stepping up to the door in the past, looked away from the door calmly the very first time I rang the doorbell.

We ended the session there, since it’s always good to quit while you’re ahead. In subsequent sessions, we dealt with other things, such as turning the doorknob, opening the door, and stepping inside.

Not every case goes this well, or this fast. I hadn’t planned to ring the doorbell during that initial BAT session, in fact, but the dog’s behavior indicated he could handle it. This particular dog was very quick to catch on to the “game,” and he made rapid progress as a result. Subsequent sessions have gotten him to the point where he is able to remain relaxed at his handler’s side when people walk in.

BAT was a revelation for this dog — you could almost see the light bulb turn on over his head.

Irith Bloom is the owner of The Sophisticated Dog, a pet training business offering services to clients on the Westside of Los Angeles. She specializes in clicker training and other pet-friendly methods of animal training and behavior modification. Irith is a Karen Pryor Academy Certified Training Partner) and a member of the Association of Pet Dog Trainers (APDT). You can see more of her writing on her Sophisticated Dog website, on Karen Pryor Clickertraining’s website and on Examiner.com.