Once Upon an Urn: The Irrational, Magical Tale of Frankie’s Return

Get a cup of coffee and settle in for a few minutes. You’re in for a bit of a long ride. But consider that it’s taken me far longer to put this tale together — a good part of a lifetime, now that I think about it.

No one is rational about death, especially the death of a loved one. No one.

A belief in heaven doesn’t protect you from a case of the crazies; neither does atheism. Grief just manifests in different ways, some more socially acceptable than others.

Indeed, the very fact of grieving a pet, in whatever fashion, is considered irrational in some circles, though not the ones I frequent if I can help it. If you’re reading this, I imagine you share those sentiments.

As I’ve mentioned before, one of my key forms of irrationality relates to the physical aftermath of death. I’ve never been particularly squeamish about the living.  And when you have a dog, it’s virtually impossible to avoid contact with bodily fluids, including — often — blood.

But the dead. Ugh.

And that includes their ashes. You’d think that dry detritus would be unobjectionable, especially for someone who lives in the desert, but not for me. It might be the bits of bone I heard don’t get burned, or the reduction of something animate to a dirt cognate. I can’t explain it. All I know is that, although cremation seemed the best option when I was unable to donate Frankie’s body to science — see Five Things I Want to Tell You, While I Can Without Sobbing, About My Dog’s Departure — I couldn’t cope with bringing his ashes home. I had my friend John pick them up from the crematorium and take them to his house.

The crematorium also made a paw print of Frankie that John attempted to give me. Ewww! Maybe I should have made one while Frankie was alive, but I didn’t. Now the last thing I wanted was a visual representation of someone paw-printing my poor lifeless sweetie.

If your best human friend died, would you want a postmortem hand print?

That’s what I mean — irrational. Or differently rationaled. I know people cherish such mementos. I’m just not one of them.

A Stint in Limbo

And so John kept Frankie in his house. For a while, I didn’t ask where. And I wavered between joking about Frankie as though he were alive  — did he enjoy the quiet in John’s house, as opposed to mine? Was he a good house guest? — to getting upset when John brought the topic up.

I give John a huge amount of credit for putting up with my Frankie irrationality (during Frankie’s life too, I hasten to add).

I said good-bye to Frankie on November 1. By the time I went to Thanksgiving at John’s house, I was ready to ask about Frankie’s precise resting place. It turned out that Frankie was part of John’s entertainment unit — specifically, he was perched atop the television. I found that oddly comforting. Jokes about Frankie’s viewing preferences commenced, and I began feeling slightly less like every nerve was exposed when we discussed him.

I don’t know how long this acclimatization process might have gone on, with me getting gradually less upset at the thought of Frankie’s ashes, if John’s departure for a three-month teaching stint in Paris hadn’t been approaching in mid-January.

I couldn’t bear the thought of Frankie being alone for that length of time, and in a house that wasn’t mine. Note: It’s yet another sign of my irrationality that the phrase “a three-month teaching stint in Paris” brought up worries about Frankie’s ashes being left alone rather than extreme Paris envy.

I was now faced with the dilemma:  If I took Frankie home, where would I put him?  I never did find the Day of the Dead urn I was contemplating — I didn’t try very hard. You know, ashes — and I could neither imagine putting the plain box from the crematorium on display nor hiding it away.

It turned out the answer had been staring me right in the face all the time.

You’ve probably been wondering where that goofy picture on the top of the page comes in. I’ve finally arrived at the background portion of the story.

Once upon a time, long, long ago, I took what I fondly refer to as my hippie honeymoon, a three-month journey from Istanbul through Iran and Afghanistan to India and Nepal, with a return through Uzbekistan and Russia — then part of the Soviet Union — to Frankfurt and back to New York. I mention this itinerary, not to suggest my intrepid nature — I was 21, and if you’re not intrepid (read: foolhardy) then, when can you be? —  but to give you an idea of what it meant to schlep home an unwieldy and rather heavy item that I bought in Afghanistan: A graceful, hand-decorated vessel made of undetermined metal, possibly pewter and copper. I wasn’t sure of its purpose. If I thought about it, I imagined it filled with water and brought to a long table, accompanied by a basin, so diners in flowing robes could wash their hands before or after a meal.

It was not a sensible purchase, to put it mildly, but that was the point. It embodied everything about the trip and about the future that was exotic and magical, like Ali Baba’s lamp.

But while it invoked the intangibles of life’s promise, this vessel was also sturdy, virtually indestructible; I wasn’t worried about it breaking along the way. And I didn’t know how old it was, but there was an ageless quality to it.

It stayed with me on all of life’s journeys, through the end of my marriage and another rented apartment in Brooklyn to a smaller co-op apartment in Manhattan, and, finally, to my current Tucson home.

It got pride of place on the top of my bedroom dresser, where I began to drape necklaces and scarves on it. In later years, the dresser top turned out to be a convenient gathering place for Frankie’s squeaky carrots, which tended to scatter. Our nearby bed — eventually, mattress on the floor — was the launching pad for most of the chases. 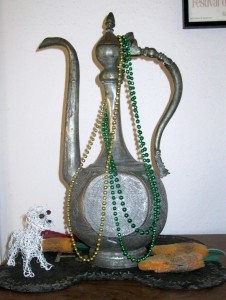 You may be getting the picture already but, oddly, it took me a while to figure it out — even after I put the wire sculpture that my niece got me on top of the dresser.

This item, to which I never attached any noun in my mind, not even “pitcher,”  had found its purpose after all these years: It was Frankie’s urn.

It seemed obvious. Frankie the shy had traveled the world in his imagination — okay, maybe mine. What could be more fitting than for him to spend his days in a lovely urn from a faraway land?

Now all that was left was to get Frankie’s ashes back.

If you think I instantly got over my aversion to Frankie’s ashy incarnation once I decided on a resting place, think again. I brought the urn over to John’s house, with the plan to return the next day when the transfer was made. I couldn’t bear to think about the process, including possible spillage, being enacted while I was present.

Yet once I was assured the deed was done, a weird but wonderful transmogrification took place. Frankie’s ashes and the urn, lid secured and spout internally stoppered, became a single beloved object that I could contemplate without fear and loathing.

I put the urn in the front seat of my car, strapped it into the seat belt, and drove Frankie back across town. Home.

Since then, I have been enjoying changing the configuration of Frankie’s dresser-top shrine.

The strands of  Mardi Gras beads that Frankie wore with such grace on the greeting card, refrigerator magnet, and cocktail napkins in which he was featured were among the necklaces that had originally been draped on the urn. And, as I mentioned, the beloved squeaky carrots were already on the dresser.  I started gathering other things from Frankie’s life, including the much mended squeaky chile, the ur squeaky carrot, and the mat on which Frankie’s water bowl had rested. I propped up the card that featured Frankie and AJ Em’s Frankie portrait on an adjacent jewelry stand.

Then I thought of the cowboy hat that Frankie wore in the first video trailer promoting Am I Boring My Dog. I’m not sure whether it’s better on the jewelry stand behind the card and picture or on the urn itself. What do you think? Too much? 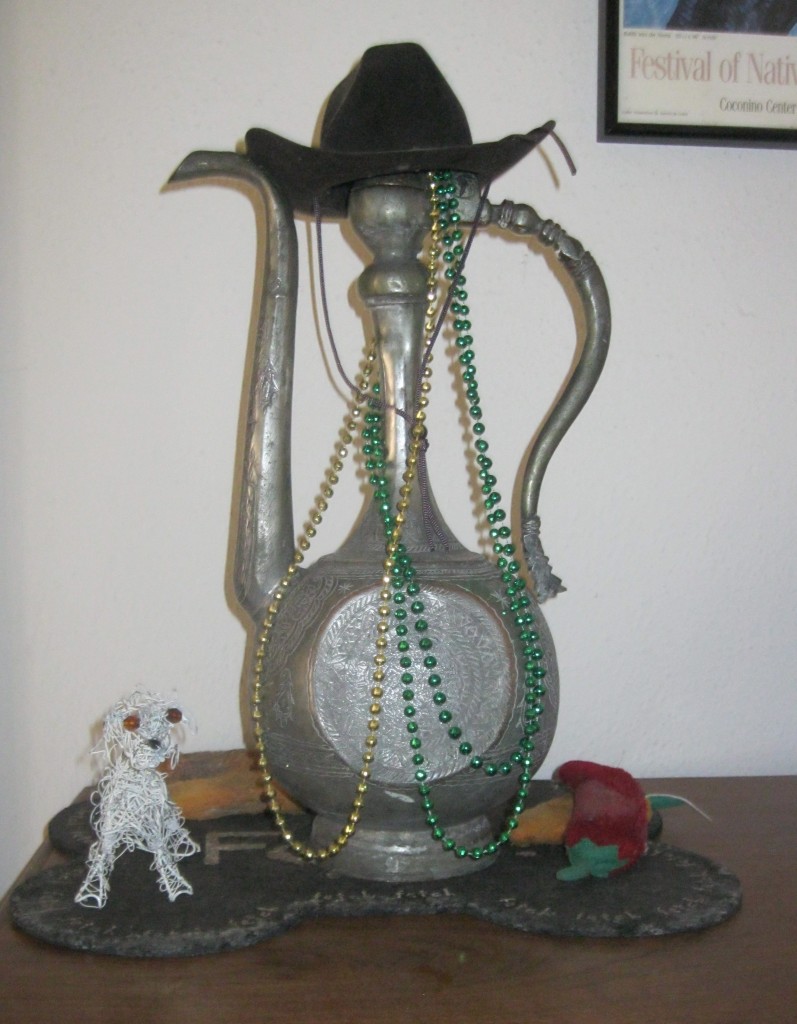 In case you didn’t notice, along with putting the hat on the urn, I also placed the squeaky chile atop the squeaky carrot.

I will no doubt go on tweaking this for a long time.

The limits — and limitlessness — of metaphor

I want to be clear: I don’t take Frankie’s residence in the urn to symbolize the death of my youthful dreams — or even of my middle aged ones. Frankie was my first dog, and he opened up another wonderful and exotic world for me, that of furry friendship. Maybe I’ll adopt another dog, this time one who loves to travel. Maybe we’ll go to wonderful places together.

Call it irrational, but the rightness of the fit of Frankie with his resting place provided a respite, for however long, from grief. The message that I took from this lovely bit of serendipity was the metamorphosis — and indestructibility — of life’s infinite possibilities.

23 thoughts on “Once Upon an Urn: The Irrational, Magical Tale of Frankie’s Return”