Hooray for HollyWOOF! A Contest BlogPaws, the big deal annual pet blogger’s conference, starts this afternoon. I’m not going this year, though I wish I could for many reasons:

That’s right. I’ll admit it. I love the swag.

Even when the goodies I got at the last two conferences weren’t Frankie appropriate, I could give them to my local shelter and know that I was providing quality products.

Hollywoof to the Rescue!

So for all of you who can’t make it to BlogPaws this year — and to all who never heard of the conference but now feel bad since I told you just how cool it is — I have a giveaway that I saved up just for this occasion.

And it’s a good one.

But, you may be saying to yourself, these people can afford to buy their own dog goodies, can’t they?

Exactly! So if you’re not movie star rich, I imagine you’ll appreciate them even more.

Here’s what I’ve got for you: 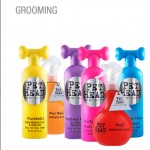 Two Squeeki Tikis, one large blue one and one small pink one, and a red Dogbon, all among the new Petprojekt dog toys that will be featured in Dimension’s upcoming Piranha 3DD movie in November. I have to admit I wanted the small Squeeki Tiki for Frankie but he was totally uninterested in it (which means he didn’t slobber on it, though I would wager a toy kissed by Frankie would be worth a lot).

I kept the oatmeal shampoo, even though it was “deodorisant” and Frankie doesn’t smell.

Just tell me in the comments section, below, why your pet is a star and deserves to get all this pet swag. That’s it. I’ll choose the winner by Random.org.

I’m paying to mail the prizes and those Pet Head products are heavy so, sorry my Canadian friends, I can only afford to send them to U.S. residents.

But if it makes you feel better, this year’s BlogPaws attendees are not eligible to enter either. They’ve got plenty of swag already. Sure they can try and I may not find out, but it’s bad pet karma.

May the pet star of your heart win!

UPDATE: And the winner, chosen by Random.org, is…. #3, Kim McMunn, whose mom has a double-skunked rescued Yorkie!  Congrats, Kim!

I am so glad that Random.org chose for me… there were so many worthy entries! And if I were awarding on literary references, I’d have to go for Denise Herman’s dog Pi, who “is like Ms Havisham and wants to sit at home, slightly bitter thinking about when she was younger and free wheeling.” I don’t know what Charles Dickens would think, but I love me a literary chihuahua.

Erin, I don’t think “bladder stoner” is a medical term, but I love it — I have an image of your dog with a bladder-shaped water pipe, getting high… I’ll be blogging about Frankie’s new insulin regimen soon but basically he’s doing fine.

And Chris, I love the description of your doxies’ “little fat frito feet.”  Your blog is a hoot.

It was a joy to read all the comments. Thank you all for participating — your dogs ARE superstars!

30 thoughts on “Hooray for HollyWOOF! A Contest”