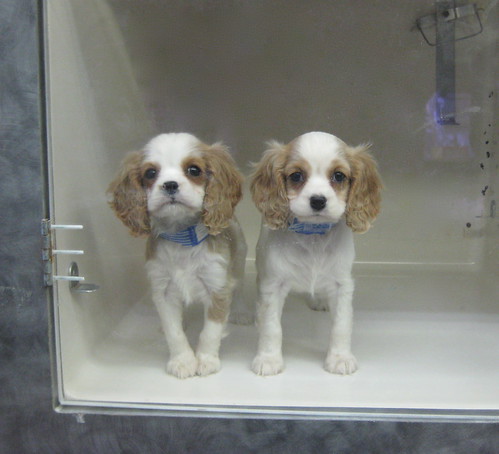 Last month, a story made the news cycles about the problem pet store owners in a posh New York neighborhood were having with people coming in drunk and buying puppies, resulting in a ban on the practice.

Inebriated passers-by are falling in love with playful pooches frolicking in the window of a West Village pet store, and the problem has become so bad the owner has banned them from taking the pets home.

“I feel like they always come in drunk,” said Fernanda Moritz, the manager of Le Petite Puppy at 18 Christopher St. which has implemented a policy against letting customers buy — or even hold — animals if they’ve been drinking.

The shop is surrounded by bars, and Moritz said many of her would-be customers stop in after happy hour around 6 p.m.

“They come from there and say ‘let’s stop by to see the puppies,'” said Moritz.

Amazingly the store, which has supplied puppies to celebrities including Sarah Jessica Parker and Hugh Jackman, isn’t the only one in the neighborhood forced to implement the ban.

After regaling readers with stories of buyer’s remorse and harm that comes to the puppies as a result of drunk buying, the story concludes:

Even though turning down drunken customers might seem bad for business, Moritz and Jacoby [of Citipups] both say they’d prefer to lose the sale.

I’d like to offer some data from the website of Madonna of the Mills, a great documentary coming to HBO soon. (Thanks to Mel Freer of No Dog About It for her post about this topic that sent me to that site.)

Pet Store Owners May Be Worse than Puppy Millers

Here’s another statistic, this one from the ASPCA: 78% of Americans are ignorant that pet store puppies come from puppy mills.

No one likes a traumatized puppy.

In some ways Mr. Moritz and Mr. Jacoby are worse than puppy millers. Puppy millers are loathsome but I believe they are no worse that factory farmers, who keep chickens cooped up in conditions even more horrific. Puppy millers consider their dogs to be livestock and act accordingly. We are disgusted by it because we love dogs (but often turn a blind eye when it comes to chickens or cows  — but that’s another post).

What excuse do the puppy store owners, who cater to a clientele that would be horrified if they knew the source of their puppies, have?

You tell me: What are the odds that Moritz and Jacoby belong to the 1% of stores that don’t get their puppies from puppy mills? Or that they didn’t know the source of their, um, inventory.

If I were writing this story…

Amazingly the store, which has supplied puppies to celebrities including Sarah Jessica Parker and Hugh Jackman, isn’t the only one in the neighborhood forced to implement the ban.

Didn’t anyone watch — or try to be on — Oprah, who ran a series on puppy mills and pet stores?

I can’t imagine that Sarah Jessica Parker or Hugh Jackman –– who clearly have pets; otherwise they wouldn’t have patronized a pet store — would want to be associated with puppy mills.

Anyone know their publicists? For a small fee, I won’t let tell anyone. Oh, wait a minute, I already did.

When I saw the statistics about the ignorance of the general public about the connection between pet stores and puppy mills, my mind immediately went back to the drunk puppy buying and how it was covered by the press, thus perpetuating the problem.

I thought, well, at least no member of the community of pet bloggers covering that story would ignore — or minimize — its implications.

I was wrong. When I googled “drunk puppy buying,”  two stories from well-respected pet sites came up in the top five on the topic.  The first was on the blog of The Bark, which covered the story by saying:

While it’s good that pet stores won’t sell animals to people under the influence (at least visibly), being intoxicated is just one of the qualities that would prevent me from selling a dog to someone. Lack of proper screening is one of the reasons that makes pet stores so problematic in my mind (in addition to the whole puppy mill issue, of course). Adding a pet to the family is a big decision that does not always get the necessary thought and planning that is so critical. As a business, pet stores rely on the impulse buys that contribute to irresponsible pet ownership.

That parenthetical bit (emphasis mine) is the only reference — one which goes completely unexplained —  to the link between puppy mills and pet stores.

The other story is on The Dog Files, another favorite site of mine. It’s the bare bones story, presented entirely without context. Only in the comments section do several people point out the puppy mill/pet store link.

My intention is not to diss these blogs, which, as I’ve said, I respect and which bring a great deal of awareness to important animal issues. But if it’s not immediately apparent to these pet savvy bloggers that the real story here is not drunk puppy buying by customers but, rather, sober puppy buying by pet store owners, how can we expect the general public to be aware of what’s going on?