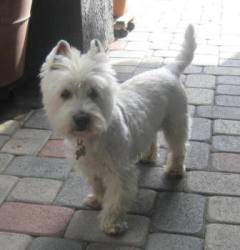 Doogie is a genuine ambassador for his breed, a West Highland Terrier who has traveled across the pond from the UK to live out his days on the beach. Ok, so he hails from England, not Scotland, but it’s oh-so-close.

It’s true that Doogie isn’t a spring chicken, which has resulted in some cataract growth in his eyes. He’s a great candidate for the surgery, but it is not required. His impaired eyesight doesn’t seem to bother him one bit, but of course who would want those spectacular Huntington Beach vistas to go unappreciated?

You can also contribute to the Help-Doogie-See-the-Beach-Cataract-Surgery Fund (okay, I just made that name up but I think it works).