Of all the dog cards…

Talk about coincidences. My much blogged-about best friend, Clare, pictured below with me and Frankie on our recent trip to San Diego, just called in great excitement.

It seemed that Clare had just received a birthday card, and of all the possibilities, she got the one featuring Frankie, produced by Borealis Press. It was sent by a friend who didn’t personally know Frankie (though naturally she’d heard of him), much less that he was on a card. Indeed, she was a bit dubious of Clare’s claim, so this post will serve as proof. 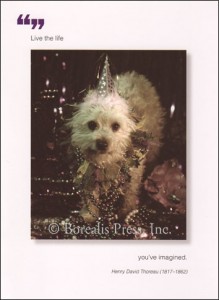 Now I’ve never been fond of Henry David Thoreau, quoted on the front of the card. In case you can’t read the small print it says “Live the life you’ve imagined.” I’ve always thought Thoreau was a big poseur, telling everyone to live the life they imagined from Walden Pond while his mother did his laundry. But I digress. I didn’t choose the quote, but it’s a wonderful picture, taken by a wonderful photographer, Amy Haskell, whose picture of her dog, Elvis, was featured in my dogs in sunglasses series, an early feature of this ever-evolving blog. Speaking of my blog’s evolution, today I optimistically added a Media page, to reflect the second interview/article in two days, this one with the TucsonCitizen.com.

3 thoughts on “Of all the dog cards…”