It’s National Dog Day and I hope you’ll take the opportunity to devote a bit of extra time to your dog. If you’re buying into the whole outdated dominance theory/need to overpower — as opposed to lead — your dog, toss it in honor of the holiday. Throw away shock collars, prong collars, spritzers, scary cans with coins… all the things that make your dog obey you out of fear rather than because you’re fun to be with.

And boycott puppy mills in any way you can think of.

Here’s my holiday treat.  Frankie and I were featured — our first interview together — on the Coffee with a Canine blog. It’s a fun series, and I asked its creator, Marshal Zeringue, how he came up with the idea.

What gave you the idea for coffee with a canine?  What kind of dog do you have — assuming you have one!
I don’t have a dog.  I decided to start the blog for two reasons: (1) in clicking around authors’ websites for Campaign for the American Reader, I noticed that a substantial number of them were proud enough of their dogs to include them in their biographies; (2) several close friends just got dogs, and I realized that more of my friends had dogs than didn’t.  I got curious and one thing led to another.

What kind of coffee do you like?
I’m from New Orleans where many of the natives are partial to coffee with chicory.  It’s strong, almost bitter: an acquired taste and my preferred brew if I’m not having something with frothy milk in it.  But I’m really not picky: I had a nice cappuccino yesterday.

And here’s an outtake, one of the pictures my friend Jackie took of me and Frankie for the interview. We’re at one of my favorite spots in Tucson, Beyond Bread. 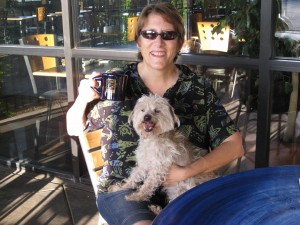