This past week, I was feeling a little sorry for myself. I wanted to buy myself something nice for my birthday but decided I was too broke even to get the new tennis shoes I need.

I do that. I’m a wallower. I try not to wallow in public too much, so as not to get a reputation for walking around with a cloud over my head, but mild misery is my default mode. My comfort zone.

Then I thought about last year’s birthday. Talk about misery. I had made a commitment to say farewell to Frankie in a week, on November 1, the Day of the Dead. I’m not going to link to any of my posts from that time, or even look at them myself; it’s too upsetting. But remembering last year, when I really had a reason to wallow, I realized I had gotten myself a pretty great early birthday present in July: Madeleine. She’s the gift that keeps on giving.

Adopting another dog wasn’t an easy decision. I felt like I was betraying Frankie, who I was/am still mourning. And I was free of responsibility for the first time in years. I wanted to travel.

But a funny thing happened last spring. I got infected by a friend’s happiness.

Leo, who blogs at Kenzo the Hovawart, also had a terrible horrible year, having to say good-bye to his beloved Viva. He wrote a lot of sad posts, which made me sad too, thus keeping me in my comfort zone.

Then he adopted another dog, Tilde. He kept posting pictures of her playing with his first dog, Kenzo, and writing these really funny blog posts. Clearly he was–dare I say it?–happy, even though I knew he was still thinking of Viva.

The urge to travel was still there–and so was a fear of the unknown. What if I didn’t like a new dog as much as I liked Frankie? I’d be stuck at home AND in a bad canine relationship.

And if I liked the new dog, that would be even worse. Dogs die and rip your heart out.

Still, the possibility of happiness, even if it couldn’t last forever… it had a certain appeal. And so I took the plunge. As has been confirmed more and more since my last post, Madeleine isn’t much like Frankie, except for being small and white and cute and stubborn (it comes with terrier territory) and bending gender stereotypes–Madeleine pees like a boy, Frankie peed like a girl. Madeleine is bold, food driven; Frankie was shy and, though he liked his chow, was too stressed to eat at all outside. He didn’t spend his waking hours trying to manipulate me into feeding him or trying to find food in every nook and cranny.

Madeleine is a gremlin, a troublemaker, too smart for her own good. I spend a lot of time during my walks with her feeling frustrated, wanting to yell. True confession: I poked her in the side one morning because she was barking–not out of fear but because she thought it would elicit treats from me. I was annoyed with myself: In heading off her (once legitimate) anxiety over seeing other dogs pass in the street, I had inadvertently trained her to associate barking with treats. She wasn’t going to let the fact that she’d overcome her anxiety stop her. My poke didn’t bother her but made me feel like an awful person.

But I spend far more time laughing than I do frustrated when I’m with Madeleine, at her and at myself. I love her spirit, her energy, and, in the end, even her ability to outwit me.

And she walks really, really fast, guaranteeing that I produce endorphins.

She’s also very sweet. I suspect that if I was lying injured in the street, she would go for help, or at least guard me. I adored Frankie with all my heart, but I was never sure about his interest in taking on any kind of caretaker role reversal. 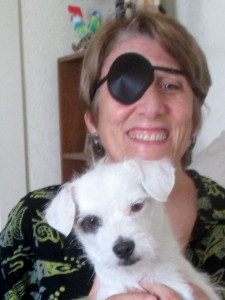 I’m not suggesting that Madeleine is a cure all for my foul moods–as evidenced by my bout of wallowing over being broke. Nor am I recommending that everyone who is mourning the loss of a pet rush out to get another one. We all have to go at our own pace.

Above all, someone in the throes of a serious depression might find the responsibility of caring for a dog to be burdensome. Another blogger friend, Pamela, wrote very movingly about that on Something Wagging This Way Comes: Dogs Don’t Cure Depression.

I’m just saying that opting for the possibility of happiness by getting a dog turned out to be the right decision for me.

My friend Cynthia put my wallowing into perspective. En route to dinner with her last week, I complained about being broke. On the way home, I mentioned that I’d spent a half an hour on the internet looking for a pirate costume for Madeleine. She laughed at me and said, “I thought you couldn’t afford tennis shoes.”

It’s always dangerous to have friends who have your number.

Not to mention dogs.