So last week this happened: I adopted a dog. She’s about four years old and weighs 12.2 pounds. She came with the name Madeleine and I like the gravitas of that, though she is very small and very lively so I don’t think anyone will blame me if I start calling her Maddie. I didn’t exactly intend to adopt her. I mean, I’d been inching my way towards thinking about adoption. I’d started ogling adoption sites. I visited the local shelter and, the same day, attended a few adoption events. But I didn’t find “my” dog, the dog that spoke to my heart, and found the whole process depressing. I was about to petsit a friend’s dog and figured I’d put the search on hold.

Then another friend posted a picture from the Humane Society of Southern Arizona (HSSAZ) on Facebook and tagged me.

Oh my. Those eyes.

The post said there was an adoption event across town where I could meet this cutie. I went. There she was, by herself in a pen. I took her in a room with me. She shed. She was very pink. Was she sunburned, I wondered, did she have allergies?

I learned she was picked as a stray in the next county over, which only has a high kill shelter. It was clear that, at one point she had had puppies; her figure isn’t entirely girlish.

If she was, there were no visible signs of it. She was friendly and perky.

I asked the universe whether she was “my” dog–you know, if she licks me in the next minute, then she is, if she follows me when I get up then she is–and the universe said yes, but I was still uncertain. The volunteer from HSSAZ gave me the adoption form and said she’d be at the PetSmart until 3.

I sat in the car and filled out the form. Then I drove away. I called the friend whose dog I was going to petsit the following day to see what she thought; I didn’t want to jeopardize the arrangement. She wasn’t home. At five minutes to 3 I phoned the volunteer, who said she was about to bring Madeleine back to the humane society and that if I was interested I should drive over there.

I stood in front of Frankie’s shrine, shed a few tears, and asked if it was okay if I got a new friend. I got no answer from him or the universe.

I waited a while. I drove over to HSSAZ. After I heard the volunteer tell the second person who phoned about Madeleine that there was someone sitting and thinking about it, I took the plunge. 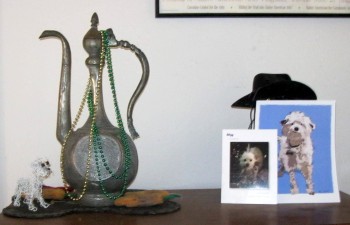 The Woman Who Knew Too Much

My friend whose dog I was going to pet sit phoned me back soon after I brought Madeleine home. I kept repeating, “I got a dog.” She said, “You sound slightly hysterical.”

I had a dark night of the soul, tossing and turning. What had I done? What happened to my travel plans–my life as a free woman?

This time, as opposed to the first time I got a dog, I know what I don’t know. The food. The insurance. The training. The car seats. The vet. There is so much that I need to do, so much money I need to spend.

Madeleine, however, had no such reservations about me and my home.

A week in, I know that Madeleine is not like Frankie, except for the little white fuzzy part. She is bold and confident, claiming me by the second night when Mimzy, the dog I was petsitting, arrived.

You can see, below, which bed was intended for whom. I celebrate Madeleine’s aesthetic sense, if not her ability to share. The ebony and ivory effect is much better with the contrast.

Madeleine is also part mountain goat. When things were suspiciously quiet and I went outside my office to look, I found her standing on top of the kitchen table. I now know I have to push the chairs in every time. I also know that I need to use a rubber band to secure the door handle of the cabinet where I keep my trash.

Even in repose, Madeline likes to find odd perches–the armrest, say, as opposed to the couch. 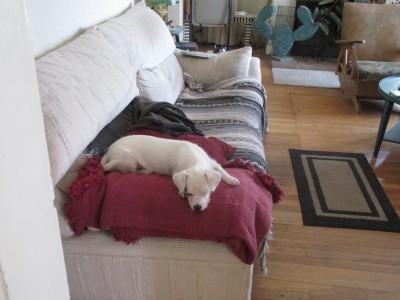 She managed to escape the harness that I used to secure her in the car, twice, even after the (new) vet I took her to made sure it was on properly.

She does not seem afraid of the car, however. Nor of lightening. She barks at it, rather than shaking.

A friend whose heels Madeleine tried to nip–three times!–said that Madeleine would never be the companion to me Frankie was, which was very mean. It was also true, in its fashion. She will be a different companion to me. I have yet to find out exactly what kind, but there is no question anymore that she is “my” dog, whether the universe or Frankie intended her for me or not. When I took her in the car to go to the vet and she seemed worried, I promised her I was taking her home again, that I would always take her home again.

In the meantime, while trying to establish such good habits as no begging at the table–Madeleine has the most pitiful little whimper and a way of putting her paws up on your legs and looking into your eyes–I am also trying to relax.

And here I can take a page out of Madeleine’s book. 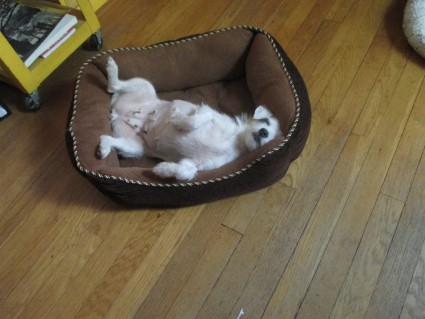