This was first published in The Bark in 2005. The Hacienda restaurant has closed and re-opened in the interim. I’m not sure whether Deb, the dog psychic, is still doing her Sedona thing.

Pamper Your Paws & Check Your Chakras

“For real softness, I’d recommend baby shampoo, followed by conditioning with Garnier Fructese,” said the bellman, helping me, my best friend, Clare, and our dogs, Frankie and Archie, into Clare’s lemon yellow VW bug. “It’s mild and a lot less expensive than those specialized dog products.” Unsolicited and unexpected, this canine grooming advice was not unappreciated, if only for its creative twist on trolling for tips. And it was typical of the attention our entourage had been getting at the Fairmont Scottsdale.

No hurried bustling of the dogs through the lobby here. Frankie and Archie are both rescued mystery mixes but, from the check-in desk to the concierge station, they were oohed and aahed over like Westminster winners.

Of course, they are exceptionally attractive dogs.

As we drove north towards Sedona, Clare and I agreed that the resort had been an inspired choice. Over the last 20 years, we’ve evolved three minimum requirements for our annual vacations together: great scenery, great shopping, and great food, not necessarily in that order. I’d recently added Frankie to my household, much to the delight of Clare, an evangelical dog owner ever since she’d received Archie into her life six years earlier. So this time we had two additional destination needs: Dog friendliness and reasonable driving proximity to both my home, Tucson, and Clare’s, Santa Barbara. A Scottsdale/Sedona jaunt fit our travel template to a tee.

A surprising number of Scottsdale’s top resorts accept pets, we’d discovered, but the Fairmont’s  “Paws on Board” program – replete with ceramic dog bowls, fleecy bed pads, and turndown treats  —  clinched our decision. It didn’t hurt that the resort’s sprawling grounds, lush with saguaros and other desert plants, would afford us long, scenic dog walks if we didn’t feel like driving off property.

We definitely didn’t our first night, devoted to unwinding and letting the pooches get acquainted. Frankie tends to be painfully shy, so for the previous week I’d been worrying: What happens if two best friends’ best friends don’t get along? But Frankie almost immediately adopted Archie as his mentor, eagerly shadowing him around our spacious quarters. Room service cheeseburgers, usually verboten for all, were followed by a stroll under a startlingly clear canopy of stars. Abandoning his usual one-stop pee squat, Frankie began imitating Archie’s more virile lift-your-leg-and-mark-every-tree (or, in this case, -cactus) technique. Life was good.

Come morning, we set out for In the Raw, a self-described “Coffee Bar, Juice Bar, Dog Bar” in a residential Scottsdale neighborhood. Dogs aren’t allowed inside – they can’t be trusted to make smart food choices, anyway — so Frankie and Archie were leashed on the terrace beside a bright red fire hydrant fountain while we ordered fresh baked corn-cheddar and carob-chip muffins for them, fruit smoothies and biscotti for us. Picky eaters both, the dogs instantly wolfed down their healthful goodies, while Clare and I savored ours somewhat more slowly. The green belt with a man-made lagoon that abuts the restaurant was ideal for a post-prandial walk.

Next stop: Mackie’s Parlour: A Pet Boutique. “We’ll just browse,” Clare and I vowed. Famous last words. We weren’t tempted by the canine bride and groom outfits, tiaras or glittery party collars but some of the cushy dog beds, particularly the donut-style variety, were very appealing. In the end I resisted: Not only does Frankie tend to prefer my covers — which he paws into submission — over anything I might provide for him, but thinking about the bed name would make me crave crullers even more often than I already do. Clare managed to escape with only a Guatemalan-weave collar, rationalizing: “Arch spends a lot of time at the beach, so the alternative, eco-chic look is perfect for him.” 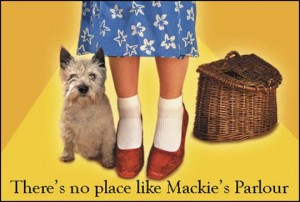 Convinced by now that our boys weren’t egging each other on to mischief, we left them alone in the hotel room while we had a leisurely dinner at La Hacienda, the Fairmont’s upscale Mexican restaurant.  The portions were generous, but the chiles en nogada and rack of lamb were so good that nothing remained to take back in a doggie bag. Mind you,it’s not as though we didn’t bring along enough pet food; anyone checking our provisions would have thought 11-pound Frankie and 28-pound Archie were preparing for the Iditarod. Still, we wanted to be able to give them special treats for good hotel room behavior. They’d just have to settle for the extra muffins we’d bought at In the Raw.

Which brings us to our departure the following morning for Sedona, less than two hours away. As a result of a last-minute cancellation, we’d nabbed a reservation at the Quail Ridge Resort. Their reasonably priced chalets and motel rooms, offering kitchenettes and abutting National Forest land, are usually booked months in advance — primarily, as we soon discovered, by dog owners.

At the Fairmont, Archie and Frankie were the sole representatives of their species, as far as we could tell. In contrast, I estimated – based on a very small, very unscientific sample — that Quail Ridge averaged 1.4 canines per room. Our own dual-dog quarters were flanked by four others hosting members of a family reunion: a woman from Australia with two Italian greyhounds; her brother from Alaska with two white German shepherds; another brother from Boston with a standard poodle; and their dogless Chicago-based parents. That’s seven dogs divided by five rooms.

Quail Ridge is just yards from a trailhead that led us through some of Sedona’s most spectacular red rock scenery. On our daily morning and late afternoon treks, Frankie continued to glean wisdom at the butt of master Archie, learning, for example, that it was okay to wander a short distance away and roll around in the dirt.

“What do you think made Frankie so fearful?” I wondered, marveling at his uncharacteristic independence. It was part of a running conversation Clare and I have about our dogs’ lives before we adopted them.  Frankie was nearly five when he was picked up by a Tucson pound, Archie about two when a friend of Clare’s found him in a field. We generally steer clear of all things woo woo, but we were in the land of vortexes and chakra adjustments. So, only partly as a joke, we decided to try to find someone who might be able to shed some light on the past of our four-legged companions.

Sure enough, the Sedona Chamber of Commerce was able to refer us to Deb, an animal communicator. The fact that she also billed herself as a holistic pedicurist (“Healing the Soul through Your Feet” her brochure proclaimed, without any apparent irony) gave us second thoughts, but we decided to take the psychic plunge anyway.

Comparing notes on our half-hour sessions later over wine and takeout pizza, Clare reported that Deb had expressed surprise that we’d actually brought our dogs along; she had assumed we would just bring photographs of them. “That explains why,” I replied, “Deb’s dogs were whining in the next room during my entire session. They weren’t used to real canine company.” That being the case, we both wondered, why didn’t she just silently communicate with them to shut up?

We continued to laugh about our experiences the next day en route back to Scottsdale, where I’d left my Hyundai so we could wend our separate ways back home. But a few weeks later, Clare called with some news. When Archie had, uncharacteristically, avoided lifting his tail for a few days, she had taken him to the vet, where he’d been diagnosed with anal sac blockage, verging on abscess. Clare protested – as she had to Deb – that she’d recently had Archie’s glands cleaned at the groomer, and that he hadn’t been doing any telltale butt-scootching. “Clearly, the groomer didn’t do a thorough enough job,” the vet had chided.

Score one for the dog psychic.

I’ve nevertheless been remiss about cleansing Frankie’s aura. Maybe that’s why he’s reverted to his shrinking violet ways, as well as to his unmasculine squatting pottie routine. Still, the trip clearly made a lasting impression on him.  The other day, at a local farmer’s market, he tugged me over to investigate an Archie lookalike. No familiar reciprocal sniff issuing from the imposter, he reluctantly moved away. But later that day, lifting his leg in precarious salute, Frankie peed long and longingly on a saguaro.