Shelter Pet Project, Pt. 2: A Pet Is a Terrible Thing to Waste “A person is the best thing to happen to a shelter pet. Be that person. Adopt.” — slogan, the Shelter Pet Project

In a three-part series, I’m exploring the Shelter Pet Project,  a campaign dedicated to ending the killing of healthy, adoptable pets. These posts are based on my interview with Rich Avanzino, President of Maddie’s Fund, one of the campaign’s co-sponsors, along with the Humane Society of the United States and the Ad Council.

In Part 1, I covered the first phase of the Shelter Pet Project, which produced and distributed a series of videos and ads aimed at changing the perception of shelter pets as being inferior. I also discussed the inclusiveness of the project, its willingness to incorporate a lot of different views and methods to achieve its goals.

Here I continue my conversation with Rich with a discussion of how the project came under the aegis of the Ad Council, as well as the potential impact of getting the Ad Council involved in this cause.

An introduction to the Ad Council

Started in 1942, the Ad Council is a private non-profit with clout.  They wrangle the advertising and communications industries, the media, and the business and non-profit communities into donating their talents and their resources to spread the word about worthy projects of their choice.

You’re familiar with their work, whether you’re aware of it or not. Public service advertising didn’t really exist before the Ad Council created it during World War II with such campaigns as Rosie the Riveter — designed to get women into the workforce while the men were at war — and the security-oriented “Loose Lips Sink Ships.” Among their iconic slogans: Smokey Bear’s “Only You Can Prevent Forest Fires,” “Friends Don’t Let Friends Drive Drunk,” and  “A Mind is a Terrible Thing To Waste,” for the United Negro College Fund. Here’s a link to some of the Ad Council’s classic campaigns (time sink alert: these ads are timeless and fascinating).

When the Ad Council  chooses to puts its resources behind a cause, you can bet the public will be aware of it.

How did the Ad Council come to chose pet adoption as one of its causes?

It started in Chicago in 2007 with Howard Draft, a founder of Draftfcb, one of the world’s largest communications agency networks. A longtime animal lover, Draft was a great supporter of PAWS Chicago, the city’s largest No Kill humane organization, and wondered how he could help the No Kill movement could go national. He was on the board of directors of the Ad Council, and it was his idea to get them involved.  It was a little unusual; they had never taken on a project that wasn’t human focused before, but the rest of the board approved it.

PAWS Chicago didn’t have a national outreach, so they thought of Maddie’s Fund, a family foundation established in 1999 to help fund the creation of a No Kill nation. The Ad Council also wanted to have an organization that worked with a greater number of shelters, and selected HSUS as a partner because they have a huge network. With our funding and their network and the Ad Council’s expertise and Draftfcb’s creative talent, it was clear we would have a great partnership.

The campaign started in 2008 and is slated to run for four years, but a lot of the Ad Council’s campaigns, like Smokey Bear [introduced in 1944], are ongoing.

So far, what has this meant?

The fact that the Ad Council chose shelter and rescue adoption to touch the American people’s hearts is huge. There’s nothing that’s even come close in the history of our movement. They have 33,000 media outlets that use their materials to promote the causes highlighted in the campaigns. We think there’s an excellent chance that 3 out of 4 Americans will see one of our four commercials in a month’s time.

We’ve already generated $33 million in donated media. We believe that, with this most recent round of materials, we’ll get even more. 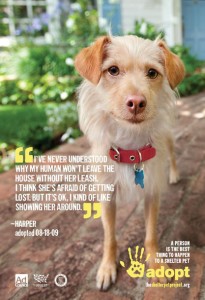 There’s the talent of Draftfcb of course to convey the messages. [EJ: I’ve included several videos from the first phase of the campaign in part 1, and will include the newest videos in part 3. The two print ads featured on this blog are also part of the latest campaign; be sure to click on them.] And the connections of the Ad Council get us celebrities to work with. We have some of the most talented Hollywood producers and directors, icons in the business, working on our TV spots. The quality of their material and the stature they have within their own industry is a huge leverage in getting our word out about saving animal lives.

Even our animal actors are of the highest caliber; they’re part of the celebrity core of Hollywood animal actors, they are all paid. [EJ: I forgot to ask if they have a union and if they earn equity wages].   They’re also all from shelters. We made it clear that we wanted the best but that they all had to be shelter animals.

How does this translate into action?

It’s said that sex and pets and children are the three things that always demand immediate attention from the public. We have one of those three things; we just have to do a better job getting the message out about shelter pets.

It’s not so much that we’re going to get $40 or 50 million dollars of donated ad space, though of course that’s very helpful. It’s that we hope to tap into the conversations that people have with their neighbors, on blogs [EJ: Done!], at the dog park… that’s where movements begin and flourish, survive and thrive. Some 14 million people — a million more than Starbucks has customers — have adopted from shelters and believe that shelters are the best and the only place to get companion animals from. We want to put a megaphone in each of their hands so they can tell the story about why they’re so thrilled about their shelter pets. We’re in a powerful position. We just have to motivate people who want to do the right thing but don’t know how to go about doing it.

13 thoughts on “Shelter Pet Project, Pt. 2: A Pet Is a Terrible Thing to Waste”