After yesterday’s shameless self-promotion post for Am I Boring My Dog, I thought it only fair to talk about some of the books that influenced, inspired, or otherwise gave me great reading pleasure while I was doing my research. Full disclosure: I started putting this list together for Flashlight Worthy Books — a great site that recommends books in a wide range of interesting, often quirky, categories — but never managed to finish it. Today, trying to think of a topic to write about, I came across it and decided that all’s fair in love and blogging. 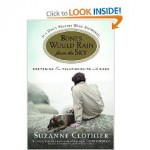 Bones Would Rain from the Sky, by Susanne Clothier

This book was among the first to open my eyes to the philosophy of positive training, making clear the advantage of communicating with dogs rather than shocking, choking, or faux-drowning them through a series of riveting personal examples. Clothier is a dream of a writer, making this book as memorable for its prose as it for its moral compass. Tell Me Where It Hurts, by Dr. Nick Trout

Compressing a series of visits to an ER at Boston’s Angell Animal Medical Center into a single day, veterinary surgeon Nick Trout packs his narrative with details about the current state of veterinary science and practice while also conveying, with humor and compassion, the deep love that many owners have for their charges. Not all of the humans Trout describes come off very well, but the dogs always acquit themselves admirably. 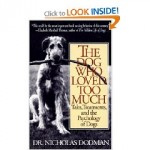 The Dog Who Loved Too Much, by Dr. Nicholas Dodman

These fascinating case studies of dogs who exhibit aberrant behaviors would be a guilty pleasure — thank heavens my dog doesn’t do that you think — except that they are written by one of the world’s foremost veterinary behaviorists (think Oliver Sachs for dogs). Dr. Dodman’s latest book, The Well Adjusted Dog, gives more practical advice on how to live with dogs, but these early case studies were groundbreaking in promoting the notion that dogs sometimes need medication to supplement more conventional behavioral therapy. 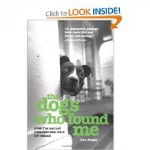 The Dogs Who Found Me, by Ken Foster

Anyone who doubts the unfairness of breed (specifically, pit bull) stereotyping or who doubts that rescuers are themselves are a breed apart should read this book. With a backdrop of the disasters of 9/11 and Katrina, as well as the author’s own heart condition, the stories that Foster tells are get-out-your-hankies heart wrenching while simultaneously unsentimental. Just get on with the job of rescue, Foster seems to say. You’ll be rewarded exponentially. 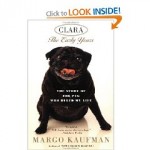 Clara the Pug Who Ruled My Life, by Margo Kaufman

The human Boswell to a canine Samuel Johnson, Kaufman brings this personality plus breed to life with the story of the charismatic Clara (don’t tell him, but before I adopted Frankie, I’d always wanted a pug). The book bogs down when the author veers from Clara into the story of adopting a baby from China, but when the pug is on the page the book sparkles with wit and, well, supreme pugness. The book begins with the passing of Clara, and I was saddened to learn that the author had died of cancer. We’ve lost a terrific chronicler of doggie ways.

Do you agree? Have other favorites to recommend? Please let me know.

Update, December 6: I’m afraid all the comments sent in were a casualty of the failed blog migration. But I would love for anyone who already submitted their picks — that means you Pat, Barrie, and Natalie — to re-send. And I welcome all new comments. Which books would you most like to re-read or buy as gifts for dog-loving friends?